ULVAC has launched a new mixer with high precise, accurate, and efficient performance, which enables simultaneous stirring by paddle rotation speed setting in increments of 1min-1 from low rotation speed and by maximum 12 different rotation speed.
We asked Tetsuya Kawagoe, Product Manager of Components Division of Ulvac, Inc. and Tomomitsu Ozeki, researcher at Research and Development Department of Ulvac, Inc. about the development and release of the mixer MICROPADDLE, which has never been realized until today.

Kawagoe：It started when I visited a major pharmaceutical company to have a meeting on our QCM (Quartz Crystal Microbalance) molecular interaction analyzers AFFINIX series. The analyzer has paddles that can stir small volume of chemical solution. A customer who saw that paddles talked to himself, "If there was a mixer that can stir such small volume of chemical solution more precisely, it would make a hit."

I could not forget his word even after the meeting. So, I shared his idea as a voice of the customer with my colleague Ozeki-san, who is in charge of product development. Ozeki-san liked this idea and soon we decided to propose a concept of a new device to this customer.

A new mixer has a stirring function that is largely extended, reflecting voice of the customer. In consideration of pharmaceutical companies who require high throughput screening, the product concept was to enable users not only to stir small volume of liquid as small as 200uL in a 96-well microplate directly with a stirring paddle, but also to stir it very precisely.

Ozeki：I was very interested in the customer's feedback, as I was always searching for new ideas to use our elemental technologies in other areas. To know the customer's needs first, I made a draft concept of a new mixer with Kawagoe-san and proposed it to our customer.
When presenting, I tried to explain it as clearly as possible how a new device would be like. I showed rough 3D CAD drawings of a mixer and pictures of a mock-up that was made with a 3D printer in order for the customer to image the concept as much as possible.

Our customer liked the concept very much and wanted a prototype for evaluation. However, we did not have any development budget at the time. We assembled parts from other old test models being left in our laboratory and quickly made a prototype free of cost.

We brought the prototype to customer's laboratory. To be honest, the prototype looked bad and was not easy to use. However, our customer decided to use it for evaluation.
Several months later, they appreciated its high accuracy and regarded it as a suitable device for their work.

Thinking back now, I am amazed that they could collect the evaluation data with such a primitive device. However, eventually we could prove our concept was correct very quickly.
If we have taken time in securing the budget and making the prototype, we would have wasted so much time.

Thinking back now, I am amazed that they could collect the evaluation data with such a primitive device. However, eventually we could prove our concept was correct very quickly. If we have taken time in securing the budget and making the prototype, we would have wasted so much time. A new business methodology called "lean startup" has spread at the time.
I think this approach helped me to test the product concept quickly, bringing positive results in the end. Starting from our customer's simple idea, we could commercialize the MICROPADDLE only in two years. In addition to our effort, we were also blessed with our company's corporate culture that accepts minor and small scale development underground.

What are the features of the MICROPADLE? 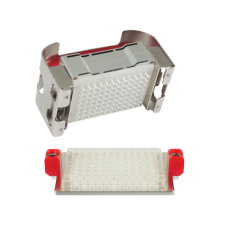 Kawagoe：It is wide range rotation speed from low to high speed which is variable from 1 to 3000rpm and a high accurate stirring performance. It is possible to set 12 kinds of multiple rotation speed and stir 96-well microplate simultaneously.

When I showed the MICROPADDLE to our customers, it gained positive feedback such as "stirring can be done efficiently", "We knew stirring was important but we had no other option but to use the conventional mixer", "We are glad to know that the new mixer is now available.", etc.

The MICROPADDLE was accepted as an improvement to what users had given up. A researcher from a major pharmaceutical company, who used the MICROPADDLE first, presented a paper "High throughput prescription designing screening" at a conference of the Academy of Pharmaceutical Science and Technology. The presentation showed that the MICROPADDLE can process larger volumes of sample solution more accurate compared to conventional mixers.

When trying to stir immiscible solution for emulsifying, it is impossible to stir with the conventional mixer as you can see in the video. In this case again, the MICROPADDLE is very useful.

What is the next step with the MICROPADDLE?

Kawagoe：I am planning to promote the MICROPADDLE in various occasions, since it is still not well-recognized in the market.

When we displayed it at a trade show in Germany in May, it received a favorable reception from lab automation manufacturers and dealers in Europe. They seemed to welcome an interesting device that Japanese engineer made.

At a meeting of the American Association of Pharmaceutical Scientists in November, The MICROPADDLE gained positive feedback from participants as well. We will promote the new mixer abroad, since pharmaceutical industry has a big market overseas. Since the MICROPADDLE is a new product that has not existed before, we will focus on its usefulness by increasing the number of application examples.

Ozeki：High throughput screening process is thought to be used mainly in pharmaceutical industry, but I feel that a large part of experiments is still done in analog ways. I believe that the highly accurate mixer with high throughput will significantly improve various operations of pharmaceutical manufacturers. Current application areas of the MICOPADDLE include dissolution test, solubility test, crystallization screening and emulsifying. We will continue to pay due attention to the customer's needs by closely communicating with them.

It may seem to be new that ULVAC has developed a new mixer for pharmaceutical industry, however, ULVAC has been manufacturing freeze drying systems for medical industry for a long time. We will keep working actively to launch many new products in this field in the future.