Protect nutrients by preventing oxidation with a vacuum chilled

Protect nutrients by preventing oxidation with a vacuum chilled. 49 kg of CO2 reduction per year.

The refrigerators are awarded for No.1 energy-saving performance among home refrigerators in Japan, which is achieved by adopting a 「center freezing」 structure and the industry's first 「Flex Vacuum Insulation」.
As a result, compared to the refrigerator of the previous year, energy consumption reduced by about 20% and CO2 emissions reduced by approximately 49 kg. There was a remarkable improvement.

New product Hitachi Mannaka(Center) Refrigerator "Nutritious Vacuum Chilled" was developed using the 「vacuum chilled room」 technology, and this product focuses on health and basic performance. The adoption of a new vacuum insulation material made it possible to achieve both the industry's No.1 large capacity of 601 liters and energy conservation.

According to a survey Hitachi conducted, the market for home refrigerators were about 4.28 million units in the fiscal year 2007, and about 4.32 million units in the fiscal year 2008. The composition ration of demand for the 500-liter class was 6% in the fiscal year 2006 but was expected to increase to more than 10% from 2007 and beyond. This may be due to a shift in replacement demand from the 400-liter class to higher capacity, which is attributed to improvements of installation of large-capacity refrigerators, higher room temperature in kitchens due to the increasing density of houses, and an increase of foods that need to be frozen and refrigerated.

On the other hand, due to the growing health consciousness in recent years, the retention of nutrients during food storage is required. To meet these needs, Hitachi developed a large-capacity refrigerator with food prevention technology under low-oxygen conditions to preserve as many nutrients as possible from oxidation.

The main features of the new product are introduced below using the 601-liter "R-X 6000" as an example. (1) World's first 「vacuum chilled room」 (Figure 1) retains nutrients in food. For the first time in the world, this product is equipped with a 「vacuum chilled room」 having a pressure-resistant sealing structure, a high-performance small vacuum pump, and a lock handle in the lower part of the refrigerator. 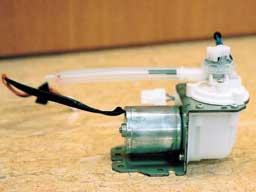 The room is sealed with a lock handle, and the air in the chilled room is sucked by a high-performance small vacuum pump to lower the air pressure and allow food to be stored under low oxygen conditions. When the air pressure is reduced, the effect of preventing the oxidation is increased, but on the other hand, discoloration due to low oxygen occurs. The optimum pressure (vacuum) in the chilled room was determined to be about 0.7 atm to avoid oxidation and discoloration based on the result of many tests.

(2)In order to achieve the industry's largest inner capacity (601 L), in addition to the gate-shaped housing, we used 「flex vacuum insulation」 for the first time in the industry. (Figures 3 and 4) 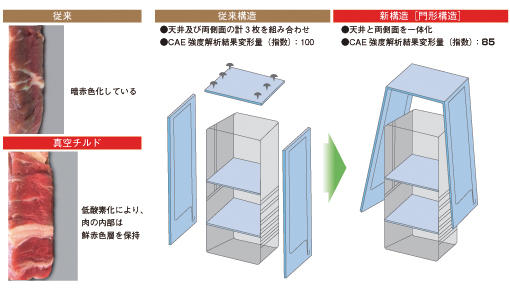 (3)Other features include the compact design and high-performance new compressors. Hitachi Appliances, Inc. planned to increase its production capacity for large refrigerators in the fiscal year 2008 and increase its production capacity by 20% from the previous year. Hitachi Appliances, Inc. also planned to invest a total of about 1 billion yen in facilities by the end of the fiscal year 2009 to support the further increases in production.

Insulation
Vacuum insulation is a method to make it difficult to transfer heat to air or materials that have the property of transferring heat.

Oxidation Prevention.
It is necessary to block oxygen from anything that you don't want to oxidize to prevent oxidation.
When a sealed space is evacuated using a vacuum pump, oxygen in the area is removed by pumping it to the outside.
In a vacuum state, the amount of oxygen decreases, so it is possible to suppress changes of substances caused by oxidation.

If you want to know more about vacuum, please go to Vacuum Basics