Do you know how many ways to test leaks? JIS-Z2331 defines 8 major methods.

・Suitable for finding a small leak point, applying to finding a relatively small leak. If quantification of the total leakage of the test object is required, a hood method is more suitable.

・Possible to quantify the total leakage of the test object that can be evacuated, but impossible to find a leak point. If finding a leak point is required, the spray method is suitable.

・To detect helium coming outside through a leak point by sniffing with a sniffer probe that is connected to LD, after pressurizing of the test object.

・Effective method to find a leak point in such following conditions.

・In case of doing the test at a higher pressure than atmospheric pressure.
・In case is impossible to hood the test object because of its complicated shape.
・In case of finding a leak point after detection of the big leak by pressure accumulation method. 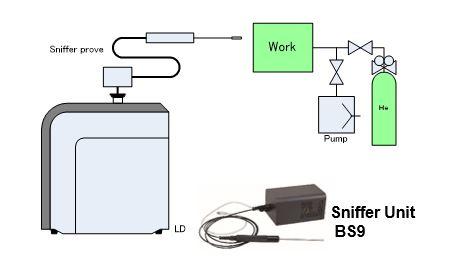 ・To evacuate the test object partially.

・Applicable to big-size vacuum containers or other pressure containers that cannot be evacuated or pressurized by the whole body because of a manufacturing process or condition of products.

・Example of application
・To check the manufacturing process of big-size vacuum containers.
・To find the regional leak. 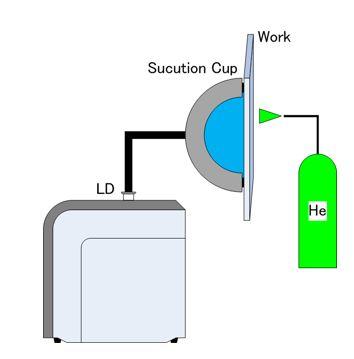 ・Applied as a method to judge sealing or airtightness of closed container whose inside is vacuum or filled with air or certain gas (package IC, quartz oscillator, etc).

・Application developed by ULVAC for low-pressure resistance products, proven in various fields. Possible to do high accuracy and high-speed test.

Consists of a pumping system similar to that used at sniffer method with an auxiliary pump. Test at a higher pressure than LD connecting pressure is available. The test pressure is arbitrarily adjustable.

Which Way Is For You?

(※)Arbitrary Pressure Method（Coined word by ULVAC）：ULVAC applications for the Work that is sensitive to pressure differences.