・Gas molecules that reach the analyzer tube are converted into ions of positive charges by the thermal electrons of the filament.・Acceleration of moving in one direction by an acceleration voltage.

1. The phenomenon called 'Fleming's left-hand rule. Ions with positive charges pass through the magnetic field and bend the trajectory. 2. At this point, the trajectory angle changes depending on the mass of each gas.
・Helium (mass number of 4) is adjusted to have a trajectory to reach the center of the Ion collector plate.・Since the mass number 3 is extremely small in the natural atmosphere, and the mass number 5 does not exist, it is easy to identify the mass number 4.

1. Only Helium ions with positive charges reach the Ion collector plate.2. A weak current flows according to the amount of Helium ion.

The current value of the ion collector varies depending on the Helium partial pressure level in a vacuum.

Adoption of a hybrid turbomolecular pump and the effect of a reverse diffusion.
The test port can be connected at higher pressure while maintaining the pressure of the analyzer tube.

* Reverse diffusion phenomenon: It is a phenomenon that a part of a small gas molecule such as Helium, which is difficult to be evacuated, reaches the analyzer tube via a molecular pump.

"Leak reference device" to convert a Helium partial pressure level of an analyzer tube into an amount unit of leakage.

Channel type. Mainly for Sniffing method (Capable for Vacuum Method)/ E-4, E-5, E-6 Pa･m3/sec range.Helium is supplied from the outside. The vacuum method uses helium at the atmosphere pressure (Differential pressure 0.1MPa). It has a suitable structure for relatively large leakage.

The amount of leakage indicated by the minimum current value detectable by the Leak detector is sensitivity. The smaller the amount is, the better the sensitivity is.
Sensitivity calibration is performed by measuring the calibrated leak regularly.

The smallest leak is expressed as a standard air leak, that can be clearly detected by a leak detector.

A method of detecting Helium leaking that comes to the outside (atmosphere) is by filling Helium into the test object and pressurizing it. 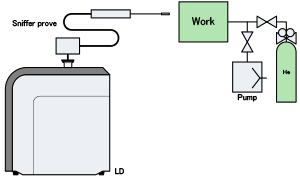 The sniffer unit is used by attaching it to the test port of LD and the vacuum pressure at the test port of LD is maintained at the level that allows continuous operation at TV2. unit.In addition to a common type that controls the pressure by the orifice at the tip of the probe, there is a sniffer type that is equipped with a pump for suction.