Liquid nitrogen is commonly used as a cryogenic refrigerant.

Reasons why it is commonly used are that the nitrogen gas that it consists of accounts for 80％ of air and so a large quantity of liquid nitrogen can be easily manufactured and obtained, nitrogen gas is inert, and it has a large thermal capacity which means it has a long retention time.

Liquid nitrogen has become essential to our lifestyles. Medical purposes it is used for include shielding for the liquid helium used for MRIs and cold temperature medical and beauty treatments. Physical and chemical applications include shielding for the liquid helium used for NMR spectroscopy and impurity removal in component analyses such as gas chromatography. And, it is used to freeze-preserve sperms and egg cells in the agricultural and livestock industry. In addition, the largest part of the price of liquid nitrogen is the cost of transportation. Liquid nitrogen can be purchased cheaper than milk when a large quantity is purchased at once because the transportation cost can be reduced.

On the other hand, purchasing a small quantity of liquid nitrogen increases the unit price of its transportation cost, which makes the total cost high. There is a significant increase in transportation cost to rural areas that are difficult to access.

To resolve this issue, liquid nitrogen generators have been put on the market to manufacture liquid nitrogen near the locations where it is used and supply it to users who use only small quantities of it.

UCI has recently started selling the newly manufactured model "UMP-40W" that can produce 40 L of liquid nitrogen per day. This paper presents a report on liquid nitrogen generators along with the introduction of the new model.

UCI took the technologies for liquid nitrogen generators which UCI got from Iwatani Industrial Gases Corp., and modified the generators to make them easier to use.

Figure 1 illustrates the process flow in a liquid nitrogen generator.

(PSA)) and a main body that liquefies the nitrogen gas.

An optional function is available to automatically supply liquid nitrogen to the specified level in a vessel that a customer provides. This function will save time and effort for

The capacity for manufacturing liquid nitrogen is mainly decided by the cryocooler's refrigeration capacity. By combining PSA, which has an appropriate nitrogen gas feed capacity, with a storage tank of an appropriate capacity, the models listed in Table 1 can handle a wide range of quantities consumed per day. 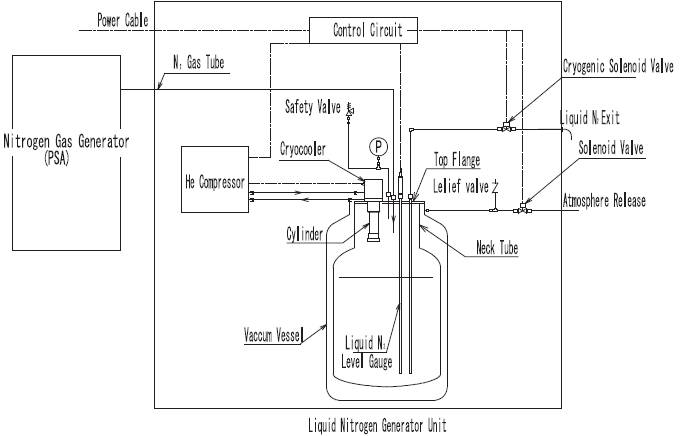 3. Elements to be considered in design

Factors that affect the generation rate and influence the concentration of impurities in supplied nitrogen gas (amounts of moisture and Ar gas) are explained below as elements to be considered when liquid nitrogen generators are designed.

Theoretically, the simplest way to calculate generation rate is to total the nitrogen gas' sensible heat (hg (J/g)) from room temperature to 77.3 K and add that to the latent heat required for liquefaction (lv (J/g)). These should then match the cryocooler unit's ideal refrigeration capacity (Q (W)) at 77.3 K. In reality, there are other factors such as heat input from the outside (α (W)) and the vacuum heat-insulated vessel's evaporation loss (β (L/day) and q (W)). Therefore, when such factors are taken into account, the generation rate (A (L/day)) can be expressed with the following formula.

Where, ρ (g/L) is the density of the liquid nitrogen.

Possible causes of the heat input (α) are 1) radiant heat from the room temperature section via the top flange, and 2) solid heat conduction from the pipes inserted in the liquid phase.

Regarding 1) the radiant heat, when the cryocooler is operating, the temperature of the section above the neck tube of the vessel is always around 77.3 K, so its effect is negligible.

A cause of the evaporation loss (β) is heat conduction of the neck tube of the vacuum heat-insulated vessel.

β is a characteristic unique to each vessel. Commercially available vessels are purchased, so the actual evaporation loss is measured and only vessels that satisfy the criteria are selected.

q (W) originates in the difference between the temperature of the cryocooler stage and that of the condensing surface (77.3 K). This occurs because when the temperature lowers, the refrigeration capacity decreases as a characteristic of cryocoolers. The causes are listed below.

1) Temperature gradient due to involvement of a liquid nitrogen layer

3-2. Relationship between the refrigeration capacity and the generation rate

The relationship between the refrigeration capacity of a cryocooler and the generation rate is discussed below.

The heat-insulating material is made from plastic foam. The heat conduction of this material is poor and it allows gas to flow.

Consequently, the nitrogen gas cooled by the cryocooler moves downward because it becomes heavier when the density increases as the temperature lowers. The temperature gradient in the y direction can cool without impairing the cylinder's cooling capacity. This makes it possible to cool the nitrogen gas' sensible heat by using the cylinder's temperature gradient and neck tube in addition to the capacity of the cooling end, which makes liquefaction of the generation rate shown with formula (1) more efficient. 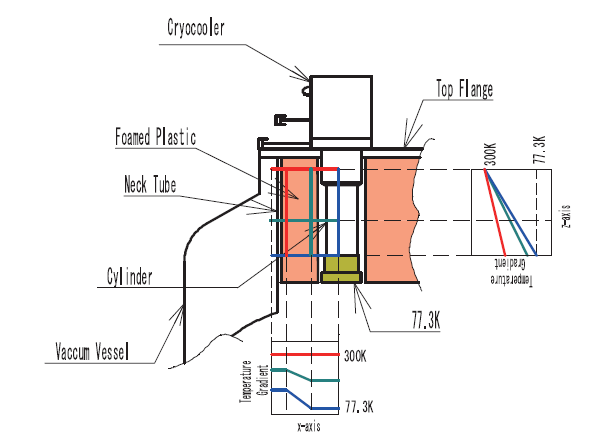 3-3. Dew point of the supplied gas

Currently, the dew point of gas supplied by PSA is standardized at －60℃ or lower and generators are manufactured based on this specification.

At 77.3 K, of course water is ice. When the cryocooler is operating, ice forms on the section of the cylinder where the temperature is around －60℃. When the liquid is taken out or the vessel becomes full, the cryocooler stops operating. At this time, the ice partially melts and moves downward. As the cryocooler repeatedly starts up and stops, ice builds up on the bottom of the vessel. If the dew point is too high, ice does not move downward but forms over all of the heat-insulating material and grows. These chunks of ice may cause the level gauge to malfunction, make it impossible to remove the cryocooler during maintenance, or cause other problems.

The air contains approximately 1％ Ar gas. This Ar gas gets into the vacuum heat-insulated vessel without being removed by the PSA. The boiling point of Ar gas is 87.3 K and the triple point is 83.8 K. At 77.3 K, solid Ar forms a layer on the surface of the cooling end and that may deteriorate the heat exchange efficiency between the nitrogen gas and the cooling surface, which may result in reduction of the generation rate. However, Ar completely evaporates when the cryocooler stops operating, such as when the liquid nitrogen is taken out, so the generation rate goes back to normal.

The Japanese High Pressure Gas Safety Act applies to cryocooler units used in Japan (discussed later). Therefore, the cryocooler unit parts that come in contact with nitrogen gas must be manufactured in accordance with the act as high pressure gas receivers. As welded pressure receivers cannot satisfy the welded structure specified in the act, the "EMP series" pressure receivers are seamlessly processed.

The heat-insulating vacuum structure is the same as that of commercially available SUS vessels, but cryocoolers, level gauges, etc. need to be installed into them, so the diameter of the openings of the top flanges is larger.

Capacitance type level gauges are used. A level gauge has an electrode at the center with a tubular ground electrode surrounding it. It can measure the liquid level by measuring changes in the capacitance caused by differences in the permittivity between liquid nitrogen and nitrogen gas. It can continuously measure the liquid level thanks to the voltage output. However, the presence of even a little ice or foreign matter makes accurate measurement impossible, so attention needs to be paid to keep anything from getting in, especially ice.

When the value for a generator calculated by the formula exceeds 0.004, it is handled as designated equipment and subject to material tests of its components, welding procedure checks, welding tests, and liquid penetrant tests. These tests also apply to cryocooler cylinders, which makes it practically impossible to manufacture cryocoolers.

Therefore, UCI' liquid nitrogen generators are designed with design pressures with which the values calculated using the above formula are 0.004 or less to allow them to be handled as general high pressure gas equipment. In addition, generators have safety valves to prevent them from being considered designated equipment.

On the administrative side, applications must be submitted to each prefectural government, so naturally the installation and test conditions for each component slightly vary depending on how the local government interprets the act.

Last but not least, the new" UMP-40W" that was put on the market recently is described below. Figure 3 shows its appearance.

Cryocoolers, compressors, control methods, and other UCI' products and technologies have been incorporated into the liquid nitrogen generator "UMP-40W" manufactured based on the" EMP series" (products UCI got from Iwatani Industrial Gases Corp.). The "UMP-40W"'s liquefaction capacity is 40 L per day. This is among the best for liquid nitrogen generators and is high enough to compete with the generators of overseas manufacturers.

The refrigeration capacity of the high-power Gifford- McMahon type cryocoolers (RMS150T) is 165 W/77 K. Note that the cylinder sections (pressure receivers) have been welded meaning that this model does not conform to the Japanese High Pressure Gas Safety Act, so this model is sold only overseas. This is one of the main differences with the" EMP series".

Although this model cannot be sold in Japan, areas (mainly Southeast Asia) where it is difficult to obtain liquid nitrogen are potential markets.

The total of the sensible heat of 1 kg of nitrogen and its latent heat (Q) is calculated using the formula below.

The refrigeration capacity of the cryocooler is 165 W (J/sec). When the density of liquid nitrogen (ρ ＝804.2 g/L) is used, the ideal generation rate without considering heat input and evaporation from the vessel is calculated using the following formula.

The specification (generation rate (A)＝40 (L/day)) is satisfied according to the calculation.

Figure 4 shows that the measured generation rates sufficiently exceed 40 L/day. This is because the sensible heat is able to be cooled effectively thanks to the temperature gradients of the cylinder and heat-insulating material.

The generation rate per day was converted from the difference calculated by deducting the gas flow rate at the outlet of the vessel from that at the inlet. 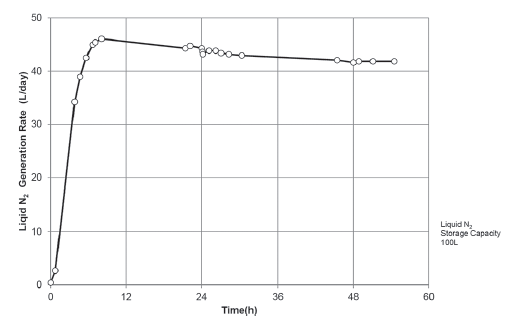 6-2. Relationship between the liquid level and the generation rate

As Figure 4 shows, as the liquid level becomes higher (as time passes), the generation rate gradually decreases. This is possibly because of the influence of Ar gas. Another possible cause is that the length of the cryocooler cylinder is shorter than that of the "EMP series" and the temperature gradient may have an effect. Either way, the authors will continue to manufacture liquid nitrogen generators and verify this point.

The liquid nitrogen produced by the "UMP-40W" needs to be taken out manually. UCI is planning to develop an automatic type in the future (e.g., precooling of superconducting magnets).

We have high hopes for future market expansion.